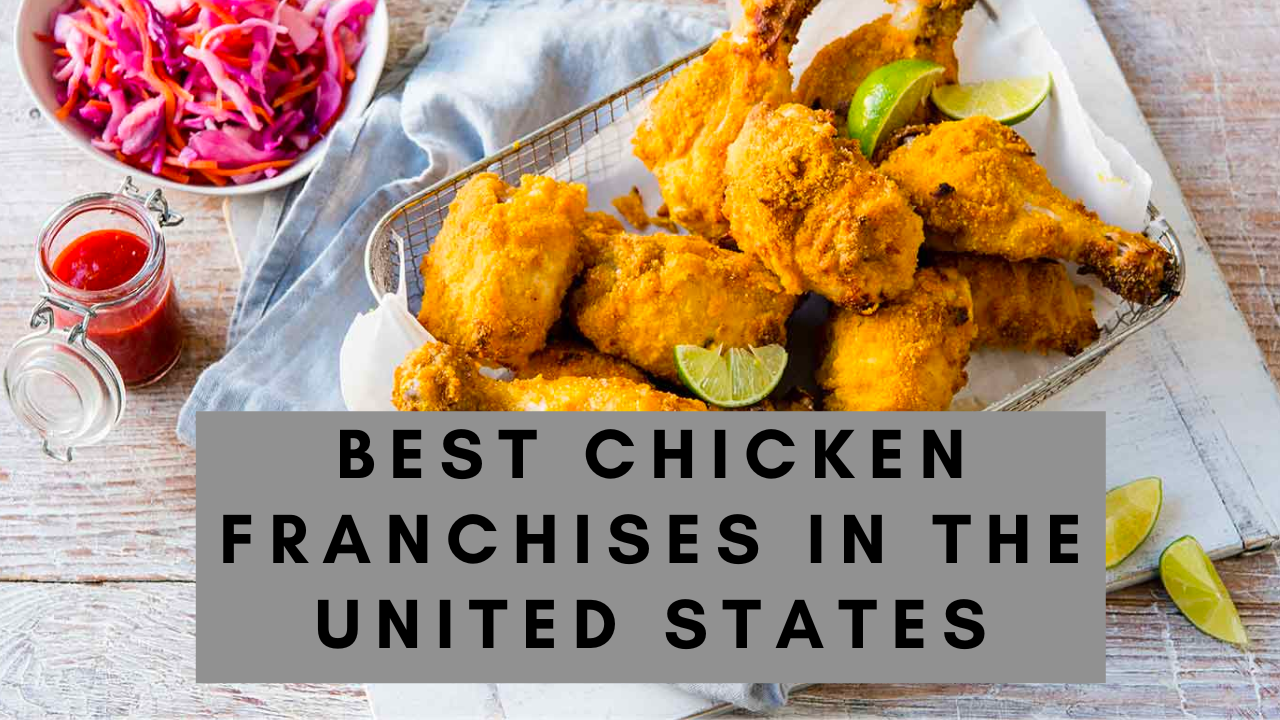 Best Chicken Franchises in the USA : In recent years, chicken has become a more popular fast-food option. Initially spurred by the low cost of chicken, this movement has evolved into a more widespread change as consumers develop a taste for chicken and its brands.

As a result, burger restaurants add chicken to their menus, while chicken restaurants steal consumers from their competitors.

Several factors have contributed to the emergence of the franchised chicken sector, including a public taste for chicken and a successful business model.

For nocturnal travelers who can pick it up quickly on the way home from work, fast-food chicken is increasingly perceived as a convenient, delicious, and cost-effective dinner alternative. People who live in cities are the primary market for this concept, and a growing urban population and people who eat on longer-distance domestic journeys are helping boost chicken growth.

It has resulted in rapid expansion for the franchised chicken industry, which is expected to continue.

Chicken franchise restaurants are the United States’ calling card. Fried chicken wings, legs, nuggets, twisters, and sandwiches are popular among visitors to the country. And there aren’t many people on the planet who aren’t familiar with American chicken brands like KFC, Southern Fried Chicken, Chester’s Chicken, and many others.

While many industries are experiencing employment losses and sales declines, fast food, notably chicken eateries, is booming. Customers now have a variety of new alternatives, including on-site, take-out, drive-thru, delivery, smartphone ordering, and other services.

Furthermore, many of the market’s flagmen use social media and technologies such as apps and websites to make advertising and other commercial procedures easier. So it’s no surprise that the best-fried chicken businesses in the United States are searching for fresh recruits to help them expand internationally.

The top 10 Best Chicken Franchises in the USA (United States)

Here is the list of the Top 10 Best chicken franchises in the USA.

It is amongst the best Chicken Franchises in the USA specializing in chicken sandwiches. The restaurant serves breakfast before moving on to its lunch and supper menus. It also caters to special events with menu options from its menu.

Chick-fil-A is one of America’s most profitable and prominent best Chicken franchises in the USA, so it sounds like a home run if you’re looking for a great investment opportunity.

Stacy Brown and her husband Kevin (who died in 2015) started Chicken Salad Chick in 2008 in Auburn, Alabama, and it is now amongst the best Chicken Franchises in the USA, with locations in 17 states.

Stacy Brown was selling her homemade chicken salad door-to-door in her hometown, but when the health department ruled it illegal to sell meals prepared at home, the Browns developed a plan to build a restaurant.

As a result, franchises have taken off under the guidance of CEO Scott Deviney, with ambitions to expand to over 200 restaurants.

Today, Church’s Chicken is one of the best chicken franchises in the UK United States, specializing in fried chicken and is known as Texas Chicken outside North America.

Fried chicken, french fries, jalapenos, and classic sides like coleslaw, biscuits, mashed potatoes, fried okra, and desserts and dipping sauces are on the menu. A geographical area will be assigned to franchisees.

It is a rule that during the Franchise Agreement, the franchisor will not open or license anybody other than the franchisee to open a Church’s Restaurant.

It is an international network of best chicken franchises in the USA (United States) known for its exceptional taste. Many Popeyes franchisees began as faithful consumers who loved Popeyes’ food and were rewarded with excellent franchise prospects and achievements.

As a result, Popeyes keeps track of its franchisees in a “Hall of Fame.” However, some international franchises, such as ones in Germany, France, and Japan, are solely available to the U.S. military and are not accessible to the general public.

Zaxby’s offers chicken wings, chicken fingers, sandwiches, and salads and is one of the top best chicken franchises in the USA (United States).

Zaxby’s has always been the ideal combination of good food, a welcoming environment, and pleasant people who care about one another.

Wingstop is one of the best Chicken Franchises in the USA, an aviation-themed restaurant specializing in chicken wings. Wingstop locations are furnished in a “pre-jet” aircraft style from the 1930s and 1940s.

Wingstop’s wings are always cooked to order, hand-sauced and tossed, and served with various house-made sides, including seasoned fresh-cut fries. A Wingstop franchise allows the owner to open one restaurant at a pre-determined location.

Harold Pierce created Harold’s Chicken in 1950, and it now has hundreds of outlets serving hot and excellent Chicken and fish throughout Chicago and Indiana. Fresh Chicken marinated in a signature blend of spices and served in their secret technique is at the heart of the company’s success.

If you choose to own a franchise like Harold chicken, you should be aware that you will be a part of a rapidly expanding network with one of the most well-known franchises.

Chester’s Chicken is amongst the best Chicken Franchises in the USA, with locations on college campuses, airports, and supermarkets. It provides customers with a high-quality chicken product cooked to perfection and has a distinct flavor and style.

All partners have a great chance to break into the QSR business with customizable locations and store designs.

Krispy Krunchy Chicken Franchise is one of the fast -growing premium c-store based quick-service (QSR) concept based companies  in the United States. The company has a great presence in the entire United States of America.It has over 2,600 retail stores/outlets in 47 states.